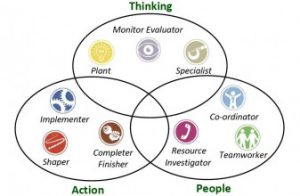 Santosh, Ravi and Mahesh have founded CleanWater, a startup that provides affordable drinking water in rural areas. They are at a stage where the product is largely developed.   Some large contracts are on the verge of being closed.  Their first implementation is scheduled to start mid-February.

Santosh originally came up with the idea for a low-cost technology to process ground water and make it potable.  Soon Ravi and Mahesh joined him to found CleanWater.  For the three it is a social cause as much as it is a business.

Santosh is best described as ‘the ideas man and networker’.  He has developed deep insight into the problem.  He understands the opportunity, the market place and customer behavior.  He is constantly looking for ideas in which CleanWater’s vision can be taken forward.

Ravi is in charge of the technology development.  He is ‘the engineer’ in the team.  He loves their product and never loses a chance to talk about how it is superior to alternatives in the market.

Mahesh is ‘the implementer’ in the group.  He is responsible for project implementation. Mahesh looks at each aspect of the business as a process.  He wants to ‘processify’ everything.  He loves checklists, operating manuals and such things. He sweats over the details.

Late January, the three had an argument.  Santosh had promised H Milner Trust that they would start implementations in December.  Bill Smith, Chairman, H Milner Trust has been a strong believer in their idea and is Santosh’s friend.

At the meeting, Ravi broke the news that it would take another two months before the product could be taken to the field. For Santosh, this meant a breach of his promise to his friend Bill. But Ravi asserted that delays in product development were a given.  Mahesh was angry that this was made known so late.  Santosh suggested that they keep their promise somehow or the other, even if it meant using somebody else’s technology.  Ravi was very upset at this idea and walked out.  This was the first time this had happened between the three friends.

Mahesh’s thoughts were: CleanWater would not exist if not for me.  I get in the customers. I have to make the promises. Ravi is unable to see the big picture.  For him the product is a piece of art – more a depiction of his ego than a technology for providing clean water.  He is always making excuses.

Ravi’s thinking:  Mahesh is the “vaporware guy”.  He has no idea of the technical details.  He sold something that he did not know about.

Santosh, to himself:  I have been asking for a process for reporting progress on product development.  Ravi rejected the idea.  Mahesh did not support me.  I have been having sleepless nights about how we will successfully implement this product, leave alone make a profit.  Maybe I should quit.

None of this was talked about.  Each went away feeling hurt, slighted and frustrated.  CleanWater was in trouble.  What’s worse, the crisis was not even visible.

To most readers, the situation is probably familiar.

There are several ways to look at this situation.  One obvious issue is lack of clear communication between the partners.

Another, more fundamental aspect to look at is, personal working styles and team roles in the context of the organization.

It is educative to read Dr Meredith Belbin’s classification of team roles, (see http://www.belbin.com/about/belbin-team-roles/), in which she has identified 8 different behavior types that individuals display at work.

How do we understand CleanWater’s situation using Belbin’s model?
Each of us naturally operates in a couple of these roles.
Santosh is used to being a ‘Plant’.  He loves big-picture thinking and leaves it to others to implement his ideas. Mahesh is probably being a ‘Specialist’ and a ‘Completer’.   Ravi loves playing the role of  ‘Completer’ and ‘Implementer’.

Each type of behavior is relevant in a certain context.  For example, while visioning the product, Santosh’s skills are invaluable.  However when planning for a target project date, he needs to also be Shaper, Monitor Evaluator.

Mahesh could probably play the role of Co-ordinator and Monitor Evaluator, if allowed to.

Finally, there is not enough of Resource Investigator and Teamworker between the three of them put together.

So how does this help us?
Firstly, we learn to separate the role from the individual.  It is not helpful to believe that a person is always like this or that.  Rather than say “Santosh is in love with the technology for it’s own sake”, Mahesh would be better off telling himself “Santosh is not thinking enough about alternatives in this situation.  But I understand that without his attention to details, we would not have a product.  Knowing him, I should be careful about how I put it across”.

Secondly, being able to switch to the appropriate style is what matters.  While it is ok to be naturally inclined to some styles, it is harmful to demonstrate too much of the preferred style or, too little of complementary roles. “We should take this lesson seriously. Let us begin to have a weekly meeting and a monthly deep dive on status of product, projects, customers.”
It would help for the three co-founders to understand these different styles, their own comfort zones and their relevance in various contexts.

Thirdly, it is worthwhile practicing the habit moving out of one’s comfort style.  This requires conscious effort.
One good practice would be to call out a role that one is going to adopt, in a meeting, so that conversations are understood in that context.  ‘The devil’s advocate’ is an example of role-play.
It is necessary to be keenly aware of collective gaps styles in the group and bridge them.

Belbin's 8 key takeaways
1) Differences in styles exist and must be acknowledged.  Not everybody does things in the same way.
2) Different approaches to work are important for success, i.e. not only do differences exist, they are necessary.
3) Each of us operates typically in two or three behavior types.  We are comfortable in those realms.
4) When we fail to understand and appreciate these patterns in our behavior and in that of others, there is dissatisfaction.
5) We must tolerate the presence of specific shortcomings in ourselves and in others. We must be alive to what is an unacceptable gap.
6) It helps to practice other styles consciously.
7) In startups, founders are required to demonstrate vastly different behaviors in different situation.  This is hard unless he/she becomes conscious of this idea.

Bhushan can be reached at bhushanvillgro.org