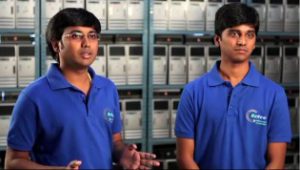 Mukund and Raghav are the co-founders of Bangalore-based ReNew IT, which won CNBC Awaaz's Masterpreneur contest last year and was selected by Villgro for its incubation programme. Here, they talk about their business and the impact they are looking to scale:

What does your company do?
The mission of ReNew IT is “To make computers affordable to everyone”. We are doing this by making high-quality, low-cost computers available to schools, students, NGOs, small businesses and anyone who wants to own a computer.
We source old computers from large organisations, refurbish them in our state-of-the-art facility in Bangalore. As India’s first Microsoft-authorized refurbisher, we install genuine Windows licenses at very affordable prices on these devices. We are helping millions of Indians to get their first computer. We help them get branded hardware (Dell, HP, Lenovo) with fully licenses genuine Windows products at Affordable prices.

Why are you excited about this space?
We live in the digital era. The mobile phone revolution has definitely transformed the lives of billions across the world especially in the emerging markets. But sadly, more than 4 billion people in the world don’t have a computer.
With less than 1 in 10 households having a computer, India is renowned for its $100 billion IT industry. There will be a dramatic transformation across all strata of the Indian society if IT penetration reaches 30% like China or 45% like Brazil. India would see a new generation of icons like Narayana Murthy, Azim Premji or Satya Nadella. There would be a very bright chance of an Indian Google or Facebook coming to the fore. Millions of employment opportunities will be created and the Indian GDP would sky rocket. We at ReNew IT strongly believe that IT would be one of the driving forces behind India’s transformation from a developing economy to a developed country.
This is where we believe we can contribute by providing access to affordable computers to millions of Indians and giving them a chance to a brighter future.

What is innovative about your product?
When it comes to mobile phones, we have phones priced from as low as Rs 1,000 to as high as Rs 50,000 plus. People have an option of buying phones at any price point. Computers, unlike mobiles, have no low-cost options unfortunately. A new computer costs around Rs. 20,000 which is beyond the reach of a vast majority of Indians. This is precisely the need gap we are addressing by selling computers for as low as Rs 7,500 which is around a third of the cost of a new computer.
Through our processes, we not only prevent premature disposal of IT hardware but also ensure that we are bridging the digital divide which exists in our nation.

What is the impact you want to have?
Since inception, we have sold more than 10,000 computers impacting over 50,000 Indians.
We have supplied computers to many rural and government schools whose students are now using computers for the first time.
Many parents are proud to have bought a computer for their kid which they couldn’t afford before.
We have been privileged to work closely with many NGOs who are doing a great job in making India a much better place.
The icing on the cake for an entrepreneur is creating more entrepreneurs – we have created many micro-entrepreneurs who now sell computers, provide AMC and after sales support. We have also created student entrepreneurs who, sitting in their hostel rooms, are managing the social media for digital immigrants.
All this wouldn’t have been possible without computers in their lives.

We strongly believe that – IT + IT = IT
If all Indian Talent gets access to Information Technology, together we would create an Incredible Tomorrow for the whole world!

We want to impact at least a million lives by 2020…