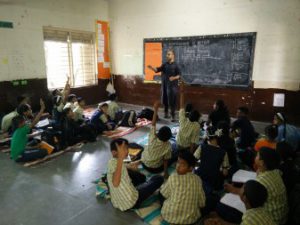 Menterra investment manager for Education, Sudhanshu Malani, has put together a report that provides an overview of impact investing in the K-12 education space in India.
Below is an excerpt from the report offering an overview of the sector. The full report can be viewed here - Impact Investing in Education Sector in India - V1.0.

Education is a potential game changer when it comes to poverty alleviation. Investments in education generate by far the highest returns with respect to future earning potential, and have significant impact on person’s life trajectory.

India has a population of 572 million people between the ages of 0-24 years (Census of India, 2015). This has led to significant government and private spending in education sector. The current K-12 school system in India is one of the largest in the world with more than 1.5 million schools that have more than 250 million students.  According to India ratings, India’s education market is USD 133 billion with USD 56 billion in private spend, out of which USD 40 billion is in K-12 Education (*Kaizen Education (KE), 2014). The sector grew at a compounded annual growth rate of 16.5% during FY 05 – FY 12. (*Shinde, 2013).

Despite vast amount of money, both government and private, being spent on education, the quality of education remains poor. Inefficient government expenditures, inability to attract quality talent, low quality fly-by night operators, and structural limitations have limited the education sector’s ability to make and impact on people’s lives, especially at the bottom of the pyramid. There are significant inequalities in access to education as far as income, gender, social group and geography are concerned. Almost 50% of students drop out before 5th grade, and 80% by the 8th grade (*Gross Enrollment Ratio (GER) in Higher Education, India, 2015). Overall, the outcomes in education are demoralizing: insufficient improvements in basic skills as demonstrated by Pratham’s ASER and PISA reports, delivering unemployable youth, huge dropout rates and lack of progress in encouraging early childhood education.

These challenges mentioned above have led to very low private investment in education, with less than 2% of total venture capital or impact investment. However, there are various factors that present need and hence opportunity for private sector participation in K-12 education sector in India.

In addition to these factors, growing middle class and lower-middle class with ability to pay, increasing penetration of technology, opening up of government regulations and increasing public-private partnerships are some factors that provide positive outlook for private investments in K-12 education sector.