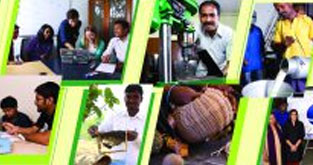 Following the leaders: Social enterprises and their founders

We are opening a new year of a Fellowship here at Villgro. During this year we, as a Fellowship, will share and document our observations and interactions with the social enterprise space. To kick off, we begin with a look into the people who founded the companies we work for and their inspirations. Social entrepreneurs come from many backgrounds, but they seem to have one thing in common: a stubbornness to get problems solved. This stubbornness and drive influences them to create solutions for people who need it most.

Under The Mango Tree

Under the Mango Tree (UTMT) was started by Vijay Pastala in order to identify income and agricultural output deficiencies in the rural farming sector. Pastala holds a Bachelor’s degree in International Relations and Women’s studies from Mount Holyoke College and a Master’s in Regional Planning from Massachusetts Institute of Technology. Before establishing her social enterprise she worked with many organizations including the World Bank, KFW, the European Commission, DFID and the Aga Khan Foundation. Her background in development and natural resource management lead her to see a confluence of problems at the level of agricultural development in the BOP space.

She saw an opportunity in both low localised honey production in India and a demand for higher agricultural productivity. With the help of an apiary expert, Atar Singh, she decided to investigate the capabilities of implementing rural honey production. This investigation led her to create the UTMT partnership that focused on a two pronged approach: generation of high revenue honey while utilizing bee pollination to increase agricultural yields. This in-farm bee-farm solution would not only lead to increased yields, but also increased revenues for rural farmers due to high honey production.

Skillveri is a company started by Sabarinath Nair in order to solve the workman skill shortage among Indian workers. Nair was led into a career in software engineering. He quickly became unsatisfied with the company he was working for and within three years he sought out a more impact-filled role with Vortex, a company helping banks connect to rural Indian populations. His background with fulfilling financing needs for BOP Indian customers led him to identify a skill training need in the BOP space.

He held discussions with Kannan Lakshminarayan, co-founder of Vortex and electro-mechanical engineering expert. In these talks he found a solution to an under-trained workforce: a gamified system that trains workers without use of raw material. This solution leverages his skills as a software engineer and provides for a market of under-served and under-trained workers in India. As Indian infrastructure development continues to boom this training software will look to more adequately train workers more quickly and more cheaply. This will enable not only higher quality workmanship but also higher wages for workers trained.

Ecozen Solutions is a company that was started by a group of engineers. Currently one of the leaders of the company is Devendra Gupta. Gupta graduated from IIT Kharagpur with a Master’s in Mechanical Engineering. Gupta was dissatisfied with his job prospects coming out of school and didn’t want to wait his whole career to start something big. So, he and his fellow founders searched for a project that they could start immediately working on. Always talking to talk about big and grand projects such as self-driving air vehicles for people, he saw that he could make the most impact serving rural farmers.

He initially teamed with a group of engineers to start producing solar water pumps. The interaction with the farmers led him and his team to realise that refrigeration was a large issue for these customers and that he had the expertise available to solve it. He saw his fit as both an engineer and collaborator with other engineers. This position enabled him to identify and solve an issue with the tools at hand (which included the people around him).

While observing the people and motivations of the founders, it was easy to see that influences and expertise were varied, but drive and a want to enable were common. Pastala created a business without a specific technical expertise, but instead a keen eye for a multiple-market integration. Nair continues to act on his passion to serve as a source of not only inspiration but also satisfaction as a rewarding job. Gupta continues to see the opportunity to add value to many people through serving BOP customers. The inspiration and expertise are varied, but all of three of these entrepreneurs act. They see a problem and they act. There is no special formula or access to starting something new, but an ability to figure out an issue and act on it as quickly as possible.