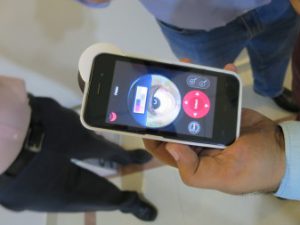 One afternoon a couple weeks ago, I was screened for anaemia using a non-invasive, smartphone-enabled device called ToucHb, which was created by a medical engineering and design firm called Biosense.

The good news: I am not anaemic. The bad news: it is estimated that half the Indian population is anaemic, and many who are don’t have access to the standard diagnostic blood test, which typically occurs in a pathology lab. The issue primarily affects low-income populations. The potential social impact of ToucHb, which brings down the cost of diagnosis and takes it outside the pathology lab, is enormous.

Over the past eight weeks, I have had the opportunity to engage with a number of social enterprises that Villgro incubates to learn about their businesses and experiences serving low-income populations in India. These companies provide innovative solutions to significant social problems, like the non-invasive anaemia-screening device by Biosense. I gained an understanding of the broader ecosystem in which these social enterprises operate, and the challenges that ecosystem presents. I was fascinated to find that regardless of sector focus, whether it be healthcare, agri-business, education, or energy, patterns arose when I asked entrepreneurs about the greatest challenges that their company faces. The two most frequent challenges facing social enterprises today are a talent gap and a distribution gap.

The first challenge that social enterprises confront today is a talent gap: they struggle to find new hires who are skilled and competent, diligent and hard-working and relentlessly committed to serving the poor. This challenge arises because of the reputation and realities of early-stage social enterprises. In terms of reputation, start-up social enterprises are perceived by some as easy and simple places to work, including relaxed hours and lackadaisical culture. This portrait tends to attract half-hearted candidates.

On the contrary, the entrepreneurs I spoke with helped me understand that their business is nothing like this perception, and they are searching for candidates who are willing to work hard towards the company’s mission. In terms of realities, young start-ups lack the job security and brand recognition of a larger company, and they also usually lack the financial means to offer salaries that compete with larger companies. These are reasons why a well-qualified candidate may opt to work in a corporate setting. Despite the talent gap, it was clear to me from the interactions I had with entrepreneurs and their teams that the ideal profile of talent and alignment with mission surely does exist, at least on the inside of the social enterprises I had the chance to visit.

The second challenge cited by entrepreneurs is a distribution gap: social enterprises readily supply innovative products, services, or business models, but the path to scale these innovations lacks robustness, efficiency, and navigability. This is largely caused by a lack of demand on the part of key scaling platforms, namely governments and large companies.

My conversation with Dr. Abhishek Sen, a co-founder of Biosense, helped me better understand the distribution gap by describing the ToucHb distribution model and the difficulties of navigating the public health system. He explained that Biosense has to incentivise four different stakeholders to use ToucHb: the government official who purchases the product, the head doctor in a healthcare facility who prescribes the use of the product, the auxiliary nurse midwife who administers the product, and finally, the patient, who is, ironically, the most important and the last in the chain. Each stakeholder requires a personalised value proposition, which makes the path to reaching the patient very complex.  It was unfortunate to learn that innovations like ToucHb with such transformative potential are stunted by lack of demand from key scaling platforms like governments and large companies.

Neither the talent gap nor the distribution gap is a challenge that is easily resolved; they are deep-rooted issues whose solutions beg for systemic change that will not happen overnight. However, like the entrepreneurs I engaged with, I believe that resolving these challenges is a crucial step to ultimately transform the lives of the poor in India.

The distribution gap could be resolved by creating demand within governments and large companies, both of which are powerful platforms for distributing innovation at scale. If a critical mass of social entrepreneurs and experts in related fields were to engage in advocacy efforts to spur demand for social innovation within governments and large companies, the potential for procurement would be greater. The talent gap and the distribution gap are two of the greatest challenges facing social enterprises today. With thoughtful solutions, the transformative power of innovation would be amplified to improve the lives of the poor.

Rebecca Singer is a student at Princeton University, USA. She did a summer internship with Villgro where she spent time with Villgro incubatees and the incubation team