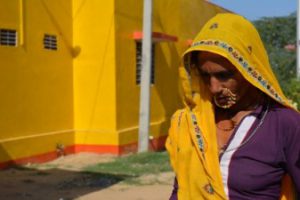 Invisible before and after pregnancy: A perspective on maternal healthcare in rural India

Susheela was eight months pregnant when she came with her husband to see a doctor with complaints of abdominal pain. The 19-year-old waited in the crowd till her husband got the prescription, and then they went to a lab for an anaemia checkup and were told to wait till they got the report.

The next day, when I visited the Primary Healthcare Centre, I asked about her and got to know that she had delivered the baby the previous night. I was shocked that she was not aware that she would be delivering her baby the same day.

I went to her room and found the happy father distributing laddus for their baby boy. Susheela and the baby were all wrapped in a blanket in the cold weather. I saw a knife placed near the baby (to ward off evils). Susheela was not able to talk. I somehow managed to get her file and checked her on her Ante-natal Checkup (ANC) visits. There was only one.

“Did you go for any check-up before or during your pregnancy?” I asked her.

“Yes! I went when I was in my sasural (husband’s home) and but now I am at my mother’s place.

In the villages, where women usually go to their maternal home (maaika) during their pregnancy until the child is born or is a year old, what happens to the ANC checkup? What about the baby’s immunization? When we posed this question to the ASHA workers, we learnt that the daughters of a village are not documented in the ANC and daughters-in-law are not documented because they would go back to their maternal homes and get missed out from both the villages.

The picture I got was that village women are very involved with household work, agriculture, forest protection, cattle care and dairying. The male members of the family usually migrate to towns to earn a living for their families. Even where the men continue to reside in the villages, it is the women and girls who look after the agriculture and cattle along with men. Typically the leftover food is meagre, considering the families are poor and have little to begin with. This creates a major problem with malnutrition, especially for pregnant or nursing women. Few women seek medical care while pregnant because it is thought of as a temporary condition. This is one of the reasons that they ignore themselves while they are pregnant. Starting from birth, girls do not receive as much care and commitment from their parents and society as a boy would. For example, a newborn baby girl would only be breastfed for a short period of time, barely supplying her with the nutrients she needs. This is so that the mother can get pregnant as soon as possible, in hopes of a son the next time.

Invisible before pregnancy and after delivery: Due to customs and practices followed by medical providers, a pregnant lady is invisible in records and sometime documented only once (which is of no use). We still need to see if this is across India or just in the villages we have visited.

Pregnancy is a temporary phase: A mother in rural villages is also invisible because pregnancy is not considered as a serious condition to be taken care of. There is a perception that it is going to be over after 7-8 months. A pregnant woman works in fields for all those months even during the final days of her pregnancy. Once she delivers the baby, the entire focus shifts to the baby. They are neither prepared for the special phase nor educated about post-delivery care.

Gender disparities: Women are the last people to eat food in the family. They eat whatever was leftover after feeding the male members of the family. Girls were breast-fed less frequently and for shorter durations during infancy, while males were fed first and better.

No nutritional knowledge:  The women have a low level of nutritional education, which explains the poor intake of vitamin rich food, especially green vegetables. There is also a lack of knowledge about the dietary pattern best suited to different age groups. They do not know how much food they need to consume during pregnancy and about the lactation period. Lack of knowledge is a cause of high maternal mortality and they suffer from various health problems such as anaemia, weakness and vomiting.

Infectious diseases: Improper disposal of waste and working barefoot leads to high instances of hookworm infection in rural areas. Hookworm infection is directly responsible for a high percentage of anaemia among women.

No information about Human Rights (Women’s Rights): The government has initiated various programmes related to anti-dowry and maternal benefits, but women lack awareness about these laws and rules. The women working in the field had no men to support them in household activities, and many women were also on the receiving end of abuse and violence by men in their family

A typical day for a woman in the agricultural labour force starts at 8 am and ends at 5 pm, with only an hour’s break in the middle. Most women are overworked, with no maternity leave or special breaks. They have insufficient knowledge about a balanced diet and most of them were unhealthy due to gender discrimination. As India is a male-dominated society, male members of the family take all decisions. Women, as ‘invisible workers’ contribute a lot to household activities as well as other outer activities and stay invisible even during pregnancy.

BIRAC SIIP intends to create a pool of early-stage social innovators committed to tackling the most severe, widespread problems in Maternal and Child health. It will provide budding entrepreneurs resources and support to immerse in a problem, identify a need and then develop a solution. With support from clinical partners and experts, Villgro facilitates clinical immersion at primary, secondary and tertiary healthcare settings.