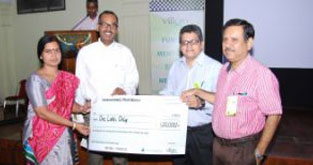 The last 2 months have been a roller coaster ride. As we continue on our journey of conducting Unconvention|L events in 15 cities in India, we are realizing that even though the execution is taxing, it gives us a great opportunity to experience new places and cultures, and, of course, understand entrepreneurial ecosystems in the regional context. The most exhilarating aspect of this is to see and hear new ideas from passionate entrepreneurs who, in ways big and small, want to make a difference.

Unconvention|L itself has gone through a metamorphosis from being just an Inspirational and Networking event in 2012–13 to also allowing budding social entrepreneurs with an idea or an already existing product/service to pitch in front of a jury this year. We hope to identify at least 50 quality entrepreneurs and support some of them through the Villgro Incubation program. After 22 Unconvention|Ls in the last 2 editions, we have been able to make inroads into regions that have previously not been tapped. This was mainly because of the tremendous efforts put in by local partners, an army of local interns and part-timers and the Unconvention team. While Unconvention|L created a buzz around Social Entrepreneurship, there was a need to sustain the effort in a continuous manner and hence we piloted the Unconvention|Speaker Series initiative in 5 cities this year. This too is gaining momentum and we are getting requests from local partners and entrepreneurs to run a similar series in more cities.

Since August 2014, we have conducted three more Unconvention|Ls in the new cycle and format – in Indore, Kochi and Kolkata. We chose to do our first event in Indore because of the willingness and, in fact, impatience of our local partners to organise an event like this. We chose Indore this year (even though we went to Bhopal last year) because of its status as the most entrepreneurial city in Madhya Pradesh. While there are many institutions in Indore promoting entrepreneurship (CII Young Indians Indore Chapter, IIM Indore, National Entrepreneurship Network, Indore Management Association, IIT Indore, ISOEL) there is only IIM Indore which has a leaning towards social entrepreneurship. They plan to set up an incubator soon within campus to promote startups in Indore.

Kochi was a surprise package. We partnered with Startup Village for Unconvention|L Kochi and were impressed with its reach and networks. The word about Unconvention|L spread like wildfire and we had over 25 applications for the pitch. After one round of screening, we chose 6 applicants to present on the final day. The event itself saw around 70 attendees, most of whom were budding entrepreneurs. It was a long but satisfying day of meeting and giving feedback to entrepreneurs. While the ecosystem is active, social Entrepreneurship is still a new concept. With players like Startup Village who have shown considerable interest, we hope that we can make inroads into Kerala and support and nurture the growth of local social entrepreneurs from the region.

Even though Kolkata is not a tier 2/3 town, the social entrepreneurship scene is just picking up. We partnered with Tie Kolkata, Bengal Chambers of Commerce and Total Start. There is a lot of focus on district level entrepreneurs and Total Start and Tie Kolkata actively support these MSME’s. We had Dr Suryanil Ghosh, a serial entrepreneur and an educator with nearly 25 years of global experience as part of the jury panel at the Unconvention|L Kolkata pitches. We also saw many teams from IIT Kharagpur apply and pitch at the event. In fact, one of Villgro’s incubates (Ecozen Solutions) is from IIT Kharagpur and the founder Devendra Gupta was the Inspirational Speaker at the event.

One common observation across the 3 regions is that whatever is being done to fuel the entrepreneurship movement is not enough. Though we have tried to activate the social entrepreneurship ecosystem, there needs to be a conscious effort on the part of local players and governments to create an enabling environment to foster the growth of these enterprises.

A common pain point with a lot of budding entrepreneurs is that there are not enough mentors and advisors. How do we ensure that these startup social entrepreneurs get the right kind of advice and support from experts from their own region – people who not only provide local knowledge but also business acumen along with local and national networks? Talent is another roadblock. Many entrepreneurs face the problem of attracting good talent to join their organisations as a lot of people want to move from tier2/3 towns to bigger cities for professional growth.

The biggest challenge is lack of exposure. People are not tuned in to the sector or to opportunities available within it. Along with these regular physical meetups, technology can play a big role here. If we as enablers can provide a platform to bring information, networks and knowledge through technology-enabled services coupled with on-the-ground activities, we would have penetrated the market and would have in some way been at the forefront of creating a mass movement to promote social entrepreneurship in these regions.

In the end, we are the cog in the wheel, the fuel in the tank and the spark that ignites; it is the entrepreneur who is in the driver’s seat. And our hope is that through the various initiatives under Unconvention program, we end up truly driving the change that India needs towards its entrepreneurial development.