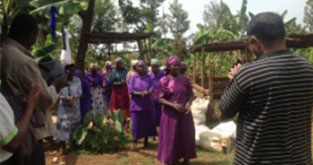 I land at JKIA Nairobi. As we drive through the traffic jam in the city, I can’t help but ponder how much I had missed this place. After 6 months of being away, it strikes me that all I needed in life was right here in Africa; the beauty of its people, the diversity and vibrancy, the drums and dances… and the future it holds as the next economic frontier.

The primary goal of my visit was to meet potential partners to replicate our model in Africa and secondly to do a comparative study of similarities between in India and Africa. My assignment started with a visit to women enterprise groups in my rural home in the company of Paul Basil, Villgro’s founding CEO. Our tour guide for the day was my mum together with her work colleagues. We were deeply moved by the resilience of these women. One particular group was composed of widows in their 60s. As each of them narrated their story, a pattern began forming. Most of them had taken their sons and daughters through school but were still struggling to fend for their grandchildren. The reason being their own children couldn’t get meaningful jobs coupled with the death of their husbands that left them in a perpetual vicious cycle. What was encouraging was to see them try to make ends meet with the remaining drop of life left in them. They had enterprising projects from ground nuts processing, homemade detergents to livestock keeping. And when asked about their aspirations, most of them wished for a good house, educate their grandchildren, buy a cow or a dairy goat and live a better life. The undying hope kept them going and I thought to myself how easier it would have been if a Villgro like model existed in Kenya. Having succeeded in supporting such grassroot enterprises in India, it was time for Villgro to share its learnings with India’s sister continent.